You’re offline. This is a read only version of the page.

How can my business reduce GHG emissions?

Apart from actively eliminating or reducing GHG emissions, depending on your business, your company can elect to purchase various internationally recognised instruments, such as renewable energy certificates or carbon credits, to validate the use of green energy and offset GHG emissions.

One of the most widely accepted certification standards for carbon credits is the Voluntary Carbon Standard (VCS). Under the VCS programme, certified projects where GHG emissions are avoided or reduced are issued unique carbon credits known as Verified Carbon Units (VCU), where each VCU represents one metric tonne (MT) of GHG reduced or removed from the atmosphere.

Examples of such projects include, but are not limited to, forestry, renewable energy and biomass-based power generation.

By retiring VCUs, organisations can claim the environmental attributes associated and have the right to report having offsetted their GHG emissions or utilised carbon neutral electricity (provided volume of VCUs retired match the total volume of emissions).

VCUs are valid for all Scope 1, 2 and 3 emissions.

International Renewable Energy Certificates (I-REC) are recognised by the Greenhouse Gas Protocol Scope 2 Guidance as a tool to document electricity consumption from renewable energy sources outside of Europe and North America.

Renewable energy projects include those such as solar, wind and hydro.

By redeeming I-RECs, organisations can claim the use of renewable energy or zero-emission electricity (provided volume of I-RECs retired match the total volume of electricity consumed).

Another type of renewable energy certificate is the Tradable Instrument for Global Renewables (TIGR). This is currently issued by various solar projects in Singapore with several other projects under development in various Southeast Asian countries. TIGRs possess similar attributes as I-RECs and work in essentially the same way.

What are Greenhouse Gases?

GHG, or greenhouse gases, are gases that trap heat in the atmosphere.

Are emissions from sources that are owned or controlled by the reporting company.

Are emissions that are a consequence of the activities of the reporting company, but these occur at sources owned or controlled by another company.

Emissions from operations that are owned or controlled by the reporting company such as those from combustion in boilers, furnaces, vehicles, or emissions from chemical production process equipment.

Emissions from the generation of purchased or acquired electricity, steam, heating, or cooling consumed by the reporting company. 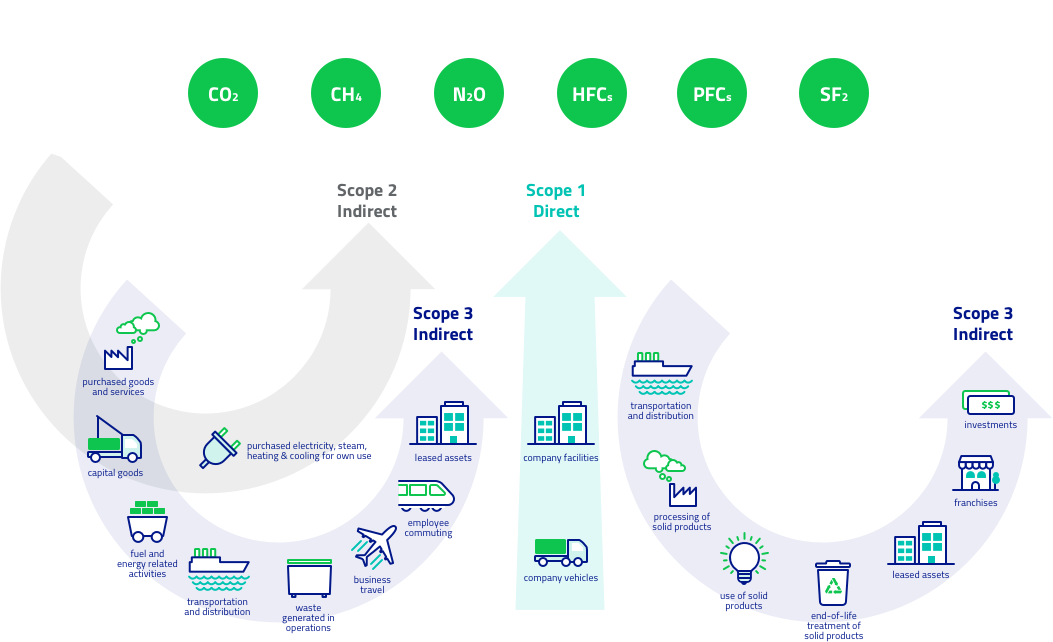 Leave us your details and we’ll get in touch with you soon.